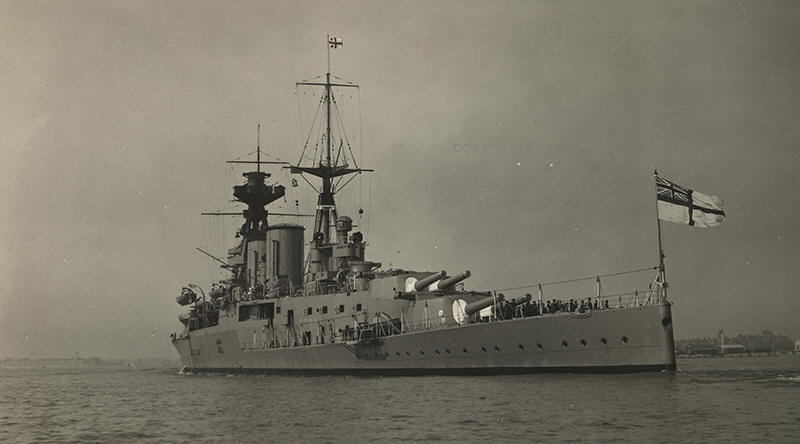 Hood personified power of the Royal Navy throughout twenty years, being the largest warship in the world.     She was originally designed as an experimental battleship with armament, protection and machinery as Queen Elizabeth class but with the new hull with moderated draught and the improved underwater protection, but very quickly the designing direction was displaced towards increase in the speed and, accordingly, lightened protection. Result was the increased Renown with fourth main turret and slightly thicker protection. Hood was laid down 31.5.1916, however the Jutland battle which has taken place that day, forced to reconsider the design completely towards cardinal strengthening of protection. The thickness of the main belt has increased in one and a half time (from 203 to 305mm), and its height was increased. Protection of turrets was improved, however a thickness of decks has changed slightly. Hood was re-laid in September, 1916, but ultimately the design  was approved by Admiralty only 30.8.1917, in a year after the building beginning: a unprecedented case in history of British shipbuilding. For this time three-gun 15'' turrets have appeared in the design, but then have disappeared. The ultimate project returned to initial idea of a high-speed variant of Queen Elizabeth, but it was reached by displacement growth in one and a half time, to 42670/46 680ts.

Main 305mm belt extended between barbettes "A" and "Y" and was 2.89m deep, its lower edge connected with main deck slopes. Its thickness decreased to stem up to 152 and 127mm consequently and to stern up to 152mm. 305mm belt area was closed by 127mm fore and 102mm aft bulkheads. 178mm medium belt between end barbettes was 2.75m deep. Upper 127mm belt connected with forecastle deck. Thickness of hull plating was 51mm (38mm at ship ends). Ship sides and belts were inclined at 12° to the vertical. Main belt was closed by bulges as its inside bulkhead and extended to the double bottom as 38mm torpedo bulkhead. Underwater protection deep was 3.1m.

Many thanks to Wolfgang Stöhr for additional information on this page.

Many thanks to Borys Estrin for granted additional information